Our first full day in Greece began eventfully when the hotel gave a 5am wake-up call instead of 6am. Their system has not adjusted to the time change haha. After a delicious (and giant) breakfast buffet, we boarded the cruise ship and sailed to our first stop: Mykonos. Due to the time change, it was dark by the time we anchored and got tinder boats into the island. But it was still beautiful. The biggest challenge was taking pictures as nothing looks as great in the dark.

Granville, our wonderful tour director, led us on a little walking tour. There were lots of cute little shops and restaurants around the harbor. We walked past the Church of Panagia Paraportiani which is actually 5 chapels merged into one. The architecture looks like someone just threw a building up with no plans! But it’s also beautiful and white-washed, as the island is known to be. We continued our walk to Little Venice, a neighborhood along that bay whose doors go right down to the water.

We then had some free time so asked Granville for a dinner recommendation. Side note: I don’t think I’ve mentioned our luck that there was another mother-daughter duo in our group whom we met initially at the JFK airport. And boy am I glad they were there! I love my mom to death, but 11 days is a long trip! We completely hit it off with the other duo and quickly became travel buddies. SO, the four of us had dinner and a cozy little place off the harbor. Of course there was a plethora of bread, and we had sangria and a Greek pizza (which I picked the olives off). Yum!

Back to the boat that night pretty much immediately to bed as it had been a long day. I would definitely return to Mykonos to spend some time – it seemed very modern and fun, yet still unique. The trip was definitely off to a good start!

about to board the ship! 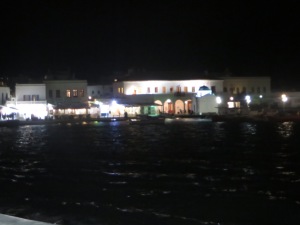