We woke up to a beautiful, yet very chilly, morning in Delphi. Built on the slopes of Mount Parnassos, Delphi was known as the home of the oracle, who told fortunes for people who traveled hundreds of miles. We started at the archaeological museum – again more amazing artifacts and statues. Many statues lined The Sacred Way – the path that led to the oracle. The Sphinx of Naxos and the Twin Kouros Statues are two of these. But the most beautiful, by far, is the bronze Charioteer. This young man had just won the Pythian Games (which took place in Delphi), you can see the sweat on his face and every detail of his body down to the eyelashes. Very beautiful.

We made our way outside to the archaeological site, walking up the winding Sacred Way as ancient Greeks used to. We reached the Treasury of the Athenians, beautifully reconstructed, then the polygonal wall – a retaining wall built in 548 BC and still completely intact as it was built. We reached the Temple of Apollo, where the oracle saw her guests, and kept climbing to the theater. The theater was built for music competitions honoring Apollo (the god of music) and is one of the best preserved in Greece (though we weren’t able to walk into it).

Back down to the bus, another delicious lunch at a family-owned restaurant in modern Delphi (I had couscous salad), then onward back toward Athens. Not without more stops though. We had a little time for coffee and wandering in Arachova, a popular winter/ski town for the Greeks. It’s a beautiful and cozy little town. Then another few hours on the bus back to Athens! Which reminds me, we had to get a picture with our very attractive bus driver, Finoures (sp?), who was a master at the sometimes sharp and dark curves of the mountains (I didn’t know Greece was so mountainous)! 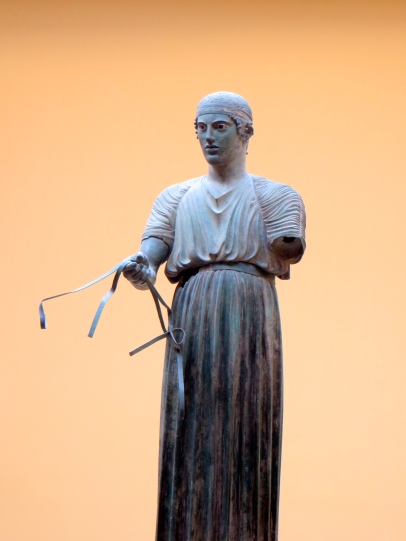 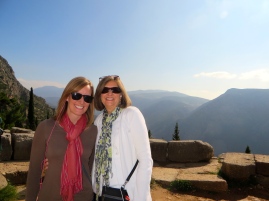 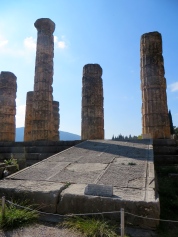 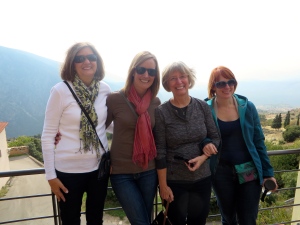