I was entering my more ‘simple’ week of the Whole30, but had already bought a pound of shrimp and a friend recommended this recipe, which sounded delicious. So I made one last kitchen-time effort to make this for dinner. And honestly, the time it takes is kind of worth it. I don’t buy shrimp a lot, so it was a treat and super delicious. I think every time I want to treat myself to shrimp I will be making this recipe. It’s also very messy, so sorry there are no step-by-step photos – had to protect the phone!

Obviously this would be great served over rice if you’re not limited or in a taco. I had some steamed broccoli and cauliflower, then used my spiralizer to make some sweet potato chips. Just toss in some olive oil, sprinkle with cinnamon and bake! 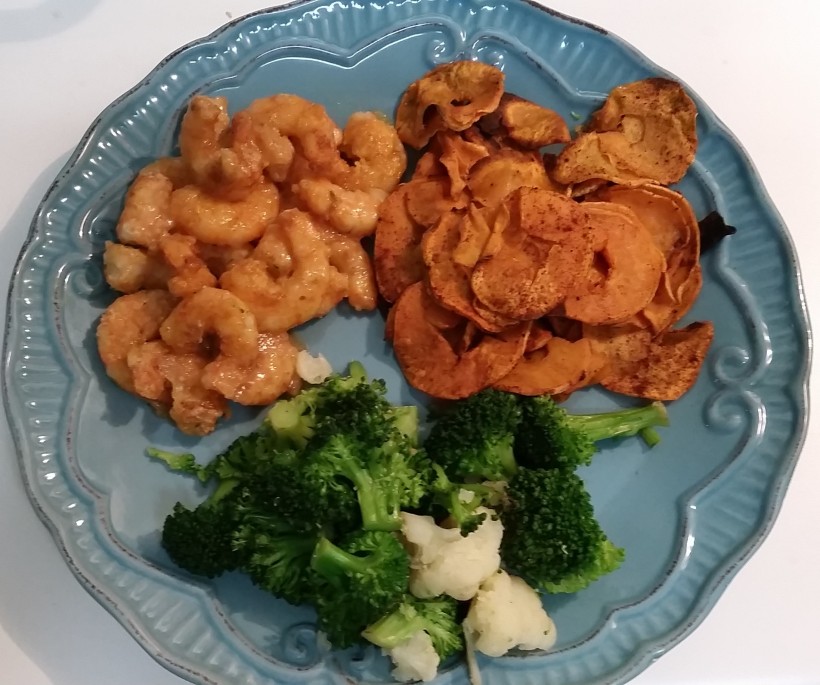 Remove the shells from the shrimp. Combine the shells and water in a sauce pan. Bring to a boil for at least 15 minutes.

Mix the shrimp and seasonings together in a large bowl.

Spread your starch out on a plate. Dredge the shrimp in the starch, shake off excess and set aside. (or I dredged some, fried, dredged more while those fried, etc.)

Heat oil in a skillet over medium to medium-high heat.  When the pan is hot, add the shrimp one at a time. They should loosely fill the pan – do not stack them or let them touch. Let each side brown quickly (~1 minute or less per side). Remove seared shrimp to a plate and set aside.

Boil for a few minutes until reduced by about half. Remove skillet from heat and add the shrimp. Stir the shrimp into the hot liquid. The shrimp will soak up most, if not all, of the liquid.