The Girls by Emma Cline was a nice diversion from the types of books I’ve been reading lately. The main character is a woman who is reflecting back on when she was a girl and the group she became involved with the summer before high school. A group that ended up doing a very horrible thing. It’s interesting and captivating. My only complaint is that there are not really any details about how this has affected her as an adult and that she seems completely fine and normal, which is possible, but not likely considering the memories she is living with and seemingly reliving on a regular basis. It’s also hard to believe that she was never, at all, brought into the aftermath of this horrible event.

The book was still a good read and was hard to put down at the end. Enjoy!

Goodreads is telling me I am 10 books behind schedule to win my 2017 reading challenge. I was maybe a little ambitious this year. But I’m not going to let it bother me. I’m also trying to intersperse some podcasts in between books, so I’m not going to feel bad when I don’t read 35 books this year.

The Nest by Cynthia D’Aprix Sweeney was a quick read but was a great narrative on family relations and dealing with hardships. Although the Plumb family is not what I would call a typical representation of the American family, what they deal with is the same as what many families deal with. The difference, to me, is how they deal with it. Or at least try to deal with it at first by trying to solve every problem with money. But in the end they learn some lessons.

I gave it 4 stars on Goodreads – ‘really liked it’ – so grab it from your local bookstore or library and enjoy! 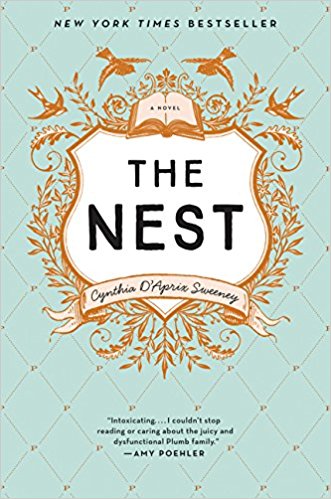 I’ve read many Jodi Picoult books and consider her to be a great writer of fictional, take-to-the-beach type books. So when I saw she had a new novel out, I didn’t even read the synopsis before grabbing a copy.

Small Great Things was probably the most personally challenging book I have ever read. Depending on who you are, it will make you uncomfortable, make you relate, and/or make you question yourself and the world around you. It is a detailed story of race and privilege. Even if you are not (or believe you are not) racist, there are inevitable prejudices we all have due to our society. This story broadcasts such prejudices, whether slight or extreme, into a spotlight.

My only complaint is the end still wraps everything up in a nice neat bow and I think it was a little unrealistic. Although most characters were based on people Picoult interviewed, so I guess it’s not completely out of the question. I also enjoyed reading, after the end of story, her thoughts about writing this story and the journey it took.

This is not a happy story but it is an important one that I appreciate her writing. Enjoy! 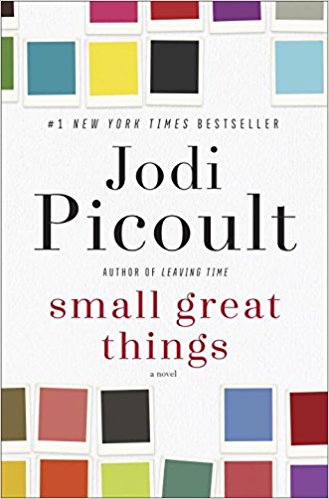 Don’t worry, the title of this post isn’t describing me. Still engaged 😉

Eligible by Curtis Sittenfeld may be my favorite book this year. A modern Pride & Prejudice, which I obviously love (original book, movies, you name it). But this is not just a similar story. The characters are the same and have the same issues and personalities, but with a 21st century twist. Liz is a writer for a major magazine, Jane is a yoga instructor, and all the younger sisters still live at home mooching off their parents. The best part is that one of two main men, Chip Bingley, is a reality show star (Eligible = The Bachelor).

This was such an entertaining read. I’m not sure if it’s because I love the original story so much, but if you do, you’ll love this. If you’re not familiar with it, I’m not sure it’s as entertaining but I still think it would be! Enjoy this great end of summer read! 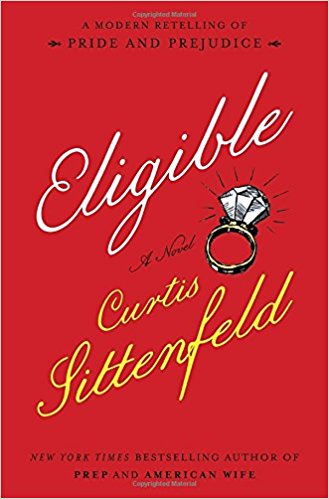 Although I am way behind on meeting my reading goal for this year, I’m just going to keep enjoying my books and not really try to catch up. I’ve also been slacking on posting my reads. I finished Opening Belle by Maureen Sherry a couple weeks ago.

It was a good read but not great. In my opinion there were too many storylines. They were semi-related storylines, but it was just too much going on. The main character is a woman trying to have it all – work in a man-filled world of finance and keep a house and two children. She’s also trying to work out some kinks in her marriage while being thrown into a working relationship with an ex. Although I appreciate this story and the details of gross inequality in the working world, the main character was a little disappointing to me. Although she was doing her best, which I can appreciate, she’s a little flaky at times.

Overall, this is a great, easy, and empowering read. For once I actually think the movie – that Reese Witherspoon is working on – might catch me more than the book did. Enjoy!

I got on a Jane Green kick as they are good summer reads. My last one left a little to be desired writing-wise, so I didn’t have high hopes for Second Chance. But Green definitely brushed up on her writing skills in the 7 years between these two books. And unlike Jemima J., I had not read this book before.

Childhood friends are thrown together again after a tragic event. They reminisce, examine their own lives, and reconnect as they mourn a deep loss. It’s definitely not a happy-go-lucky read. The group are all in very different stages in life, each navigating their own issues. In truth, it’s kind of depressing. But there are redeeming scenes and the characters are captivating.

Another quick read – good for the plane or road trip. Enjoy!

I was looking for some more easy, entertaining summer reads and remembered reading a number of Jane Green’s books years ago. I still have 3 on my bookshelf. So I downloaded a couple. I started Jemima J. and quickly realized I had read it before, but it had been long enough that I didn’t remember the details. So on I read.

Although this story was somewhat entertaining, I have a lot of issues with both the story and the writing. Granted, it was published in 2001 and I think was one of Jane Green’s first books. Writing-wise, she inconsistently switches between first person and narrator and first-person narrator which was pretty confusing. I did not like the random first-person narrator talking directly to the characters and readers. That works for movies and tv but not so much in written form.

The entertaining part of the storyline is that the internet is new and the characters are discovering chat rooms – the first form of online dating. The part I take issue with is the fact that the main character is an overweight woman who is miserable with her life, decides to make a lifestyle change for a man (Green kind of tries to deflect that this is the reason but not very convincingly), and does so to an unhealthy degree. I don’t care about spoilers for this book because it’s been around so long, but she ends up reconnecting with an old love who obviously falls for her, and Green half-heartedly implies that he was interested in her before she lost the weight. But again, not convincingly.

Overall, if you don’t think about it too hard, the book is entertaining and it’s definitely an easy read. And written when it was, I sadly think this kind of storyline was more widely accepted. Unfortunately, there are real life stories of women losing a ton of weight and only then feeling good about themselves and getting attention from men, but this is definitely not the message I personally would want to send out to my readers.

I’ll definitely read more of Green’s books, especially some of her newer ones. I’ve already started another and the writing is, at least, much better. Yay for summer reads!