My new favorite podcast is Wait, Wait Don’t Tell Me from NPR and WBEZ Chicago. It’s a weekly quiz program based on that week’s news stories. There is a panel who answers questions and callers who participate in different games. The games include a lightning round for the panel, and 1 truth & 2 lies stories, limericks, and more. This is the most entertaining “news” you will ever get and there is always a celebrity panelist – writers, singers, actors – some names you know, some you may not, but they are all great. I’m sure people think I’m crazy when I’m running because I am smiling and laughing out loud listening.

Thanks to a friend for the recommendation and everyone should check it out! You might even enjoy running a little more.

My family played a lot of games growing up and I still love games. Every holiday, when we are together, the nightly question is ‘what are we going to play?!’ Luckily I also have friends who love games, so I like to have a game night every now and then – though it doesn’t happen nearly often enough.

We had game night last weekend and it was, as always, lots of fun. A few treats, sangria, some games and good friends and you have a perfect evening (in my opinion, at least). Of course, the more people the fewer game options. But there are plenty for larger groups. Here are some of my favorites:

Catch Phrase: get your teammates to guess the word or phrase the game console gives you

Apples to Apples: the judge reads a green apple card and players play a card from their hand that matches best. the judge chooses which red card he/she likes as the best match.

Cards Against Humanity: the adult, much more inappropriate version of Apples to Apples

Scene It: play in teams to answer questions about movies, tv, and entertainment

Celebrity: each person writes 2-3 names of celebrities and/or well-known characters. Divide into two teams. Alternate one player from each team, drawing names from the bowl in 3 rounds. First round you can say whatever you want to describe the person/character. Second round you can only say one word. Third round is charades. But it’s the same people/characters each round!

Pictionary: get your team to guess the word by drawing it. Most entertaining when played with a white board.

Does your family play games? What are your favorites?

M&Ms are required at every party 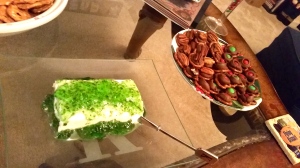 #12 of my 30 list is complete! There are SO many bars in Atlanta. Seriously any kind of bar you could want. But this newest one is for sure my type of bar. The Painted Pin is boutique bowling/game bar. I love games, a little competition, and delicious food/drinks. If you want to bowl, get there early (we got there around 7:45pm and didn’t have to wait for a lane). You pay by the hour and it is full service – they set up your game, bring your shoes, and take your orders for food and drinks.

But you don’t have to bowl. All the other games are free and there are plenty of options. We bowled this time, but we also played bocce (one of my favs), skeeball, basketball, ping pong, and skittles (we had no idea what it was either). I think all we missed was darts and table shuffleboard.

We decided to check out the food too since we went early to bowl. We split the Pin Fries with pesto aioli and Prosciutto & Pineapple pizza. The fries were amazing as is, but the pesto aioli made them 5 times better.  The pizza was good too – nothing extraordinary but great to share. But the winner was the drink: Moscow Mule Slushie. Delicious is the only description it needs.

I highly recommend this place – I’ll definitely be there occasionally and maybe more since it’s very close! 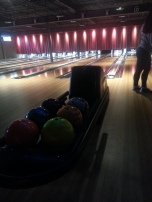 I love Jimmy Fallon. I love games. And I love watching celebrities get competitive. This one is two parts and totally worth watching both (although in general they are kind of horrible at charades). Happy Friday!!

I’ve decided that most of the best times we have are doing simple, cheap/free things. Today was a gorgeous day, after, not even kidding, about 2 weeks of rainy, icky weather. We went to the park, brought food, chilled on the grass, played bocce ball and frisbee. Roommate M and I dominated at bocce ball, but the boys definitely take the cake for frisbee. There was no cost for any of this and it was probably one of the most enjoyable weekday activities we’ve done. And that’s also what’s great about summer….you can do this a lot!

So I recommend finding a close park: go run, walk, play, or whatever makes you happy….for free.

Here is a fun face memory game a professor showed us in class!

Click “Start” below the face to mix facial features.

Memorize these facial features, then click “Ready” to start.

Select each feature to recreate the fcae you just memorized.

screenshot of my game