This book marked the completion of my 2019 reading challenge! 34 books finished on October 2 (my book posts are only on Tuesdays so they are a little behind)! I really have the train to thank as it gives me ample time to read every day. Especially on those odd days when there are mechanical issues and it takes 2 hours to get home.

I have read 2 other books by Kate Atkinson – Life After Life and A God in Ruins. Neither was my favorite so I haven’t read another of hers. But my friend who has also read those told me that Transcription was much more likeable. She is my guru for books so I gave it a shot. And of course she was right.

Transcription is historical fiction that takes place during WWII. Juliet is recruited to work for MI5 (think CIA in Great Britain) and ends up taking on various roles. She begins by simply transcribing conversations between an MI5 agent and some German sympathizers, but is eventually looped into the espionage ring by taking on alternate identities and sent in to form relationships with suspects. And of course it wouldn’t be an Atkinson novel without some time jumping. In 1950 post-war Britain, Juliet thinks she has left that life behind but realizes how difficult it is to escape when ghosts from her past begin appearing again.

My coworker and I set out on the road last week to visit project sites in two states. And although we only had 5 stops to make, the sites were reallllly spread out – so it took 4 days. And LOTS of time in the car. 1,091 miles to be exact. 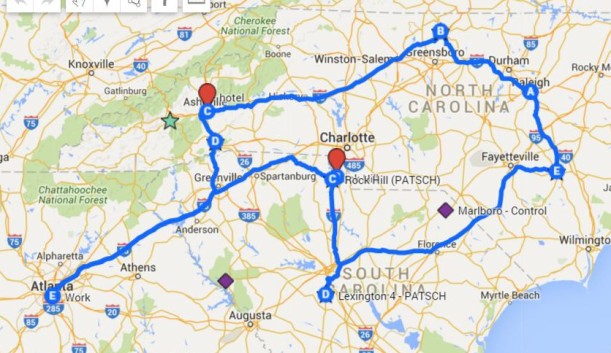 Luckily, my coworker and I are also good friends and enjoy books. So I found an audio book that was on both of our to-read lists. We had both read Life After Life by Kate Atkinson, so were not completely surprised to find that A God in Ruins by the same author had a similar structure – constant time shifts and a lot of characters. Not really the best structure for an audio book in my opinion. But we powered through – and almost finished before the end of the trip. Luckily, I left less than 24 hours later to drive another 500 miles round trip, so was able to finish it.

I wouldn’t say A God in Ruins is a sequel to Life After Life, but it is related in that in involves some of the same characters, but focuses on different characters. Sadly, neither my coworker nor I actually realized this. I honestly had forgotten what Life After Life was about exactly, much less specific characters from the book. That’s what 30 will do to ‘ya…..

Anyway, Life After Life focuses on Ursula, while A God in Ruins is about her brother, Teddy. It covers an entire century, from Teddy’s childhood to his death, as well as pretty much every person involved in Teddy’s life. Listening to this book, it definitely took a little while to figure out relationships between characters, though I did get there eventually. The time was what was really difficult to follow. Because although this is the story of Teddy’s life, it is not told sequentially. A good part of the book covers Teddy’s time in World War II and is very interesting. And Atkinson does touch on slightly at the end, as is the main idea of Life After Life, how one change of an event will affect the future of events and lives. There is really nothing special about Teddy’s life (other than fighting in the war), but that is the appeal of the story. A fairly ordinary man living and navigating through life.

I recommend it but not as an audio book. And read it only if you’re in the mood to really pay attention to detail and timeline. And again, reading Life After Life before is not required and wouldn’t even be helpful in anyway. Up next, another audio book as I am driving, yet again, for the Thanksgiving holiday. Hopefully this one isn’t quite as draining. If you have a good audio book suggestions, please send away! 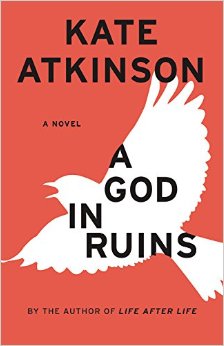 Book #13! This may be the most unique and interesting book I have ever read: Life After Life by Kate Atkinson. You can pull one quote from the book to describe the general concept of the book: “What if we had a chance to do [life] again and again, until we finally did get it right? Wouldn’t that be wonderful?”

Ursula, the main character, goes through life after life after life, trying to get it right. Think groundhog day but instead of golf and comedy, it’s war, family, murder, love, alcoholism, and rape. Sounds great, right? Honestly, much of the plot is sad and depressing, but there are good moments too.

The storyline restarts at various moments – and no it’s not always easy to follow. It’s a powerful statement to how one little moment can change the trajectory of the rest of your life. Of course we’d go crazy if we went around life analyzing how every decision – large and small – would affect the rest of our lives. But it’s an interesting concept to think about. The timeframe of the story also made it interesting – pre- and during World War II. It was a different perspective on the war, though: the efforts of women in Britain to protect and help friends and neighbors in the middle of bombings. Very intense.

Anyway – I know this review seems all over the place, which is kind of appropriate for the book, but it really was a good book. Just make sure you read it when you can pay attention and focus! 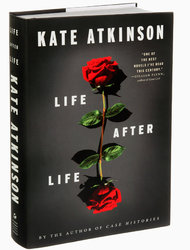