Many years ago, when I was in high school (yes, that was many years ago), there was a little restaurant called Food Ease. It was in a little strip behind the Applebees and it was delicious. Asian-inspired chicken fingers, fried in panko crumbs, that were sweet and savory at the same time. And how in the world did they get their rice so perfectly sticky? And omg the sauce.

But sadly, they closed. For years friends talked about Food Ease and the chicken and many tried to replicate. I even took a stab at a recipe. But it was no where near the same.

Then one day, there was news. The family was returning to Atlanta. And was going to re-open. And it was going to be near my house!!! I really can’t explain the excitement and I don’t think I will ever be as excited about a restaurant opening than I was then. It took a while to get open, but they were kind enough to do tray sales on certain days, so we could get our fix of chicken while anxiously awaiting the grand opening.

And grand it was. Ponko Chicken opened and it lives up to every memory and expectation. You can find it in the Chamblee area and Midtown because, yes, someone quickly opened a franchise location because, yes, it is that good. And the best is that there are so many options! Finger plates, sandwiches, tacos, hot dogs salads. OG, spicy, bbq. Numerous side options. Delicious flavored teas, beer on tap, and wine. Desserts.

My go-to is a finger plate, OG, with white rice and Ponko fries. But the tacos are also delicious. my husband likes the spicy fingers. And of course you cannot forget the extra Ponko sauce and ranch. And no, it’s not just any asian-style sauce or ranch. We always have a bottle of the Ponko sauce in our fridge at home because of course they sell it. They’d be dumb not to!

Anyway – if you can’t tell, I love this chicken. And the restaurant. And I am so happy they returned and re-opened to build their Japanese American chicken tender empire. If you haven’t checked it out – what are you waiting for?!

My Christmas present to my brother and sis-in-law (and myself) was tickets to see Wicked here in Atlanta. Excuse to see my favorite show ever, take two of my favorite people who had never seen it, and see my nephew (if just for a few short hours)! We went to the matinee show last weekend then out to dinner. I had asked a friend to recommend a new place in Decatur – I love new places and Decatur has plenty of them. He highly recommended Pinewood Tippling Room. And it was a great one.

We went all out for a fun day/night on the town – we don’t get a hang out a lot and they don’t get to go out a lot! The drink menu is extensive, with some unique and delicious-sounding cocktails. I had a free grit-tots appetizer (by signing up for their email list) and we also got the brussel sprouts (we were really hungry). For my meal I got the duck breast with braised kale, sweet potatoes, and dried cherries. Yum. It was my first time having duck and it was delicious.

Pinewood is a smaller place, so make a reservation, make a night of it, and enjoy!

The second restaurant I made it to before the holidays was Table at Ten in the heart of Midtown. ScoutMob has some great deals for brunches and dinners for 2 and is an easy way to make yourself try a new place. This was no different – brunch for 2 at Table at Ten was perfect for a little pre-Christmas get-together for my friend of 27 years and I.

They had a very good and unique menu. We started with some mimosas and took our time deciding what to order. My favorite brunch food is benedicts, so I went with Florentine Benny with fresh veggies and a perfectly poached egg. Recently most of the benedicts I’ve ordered have overcooked poached eggs, so it was nice to get one cooked correctly. My friend’s order took the cake though: chicken-n-waffle sliders. Crispy chicken and candied bacon between mini waffles, with syrup for dipping. Of course I had a bite and it was just as good as it looked.

There wasn’t a crowd or even a wait (though it was a dreary Saturday), so check it out on the weekend if you want a new delicious brunch! And for me, just one more new restaurant to try to check off another 30 before 30 item! 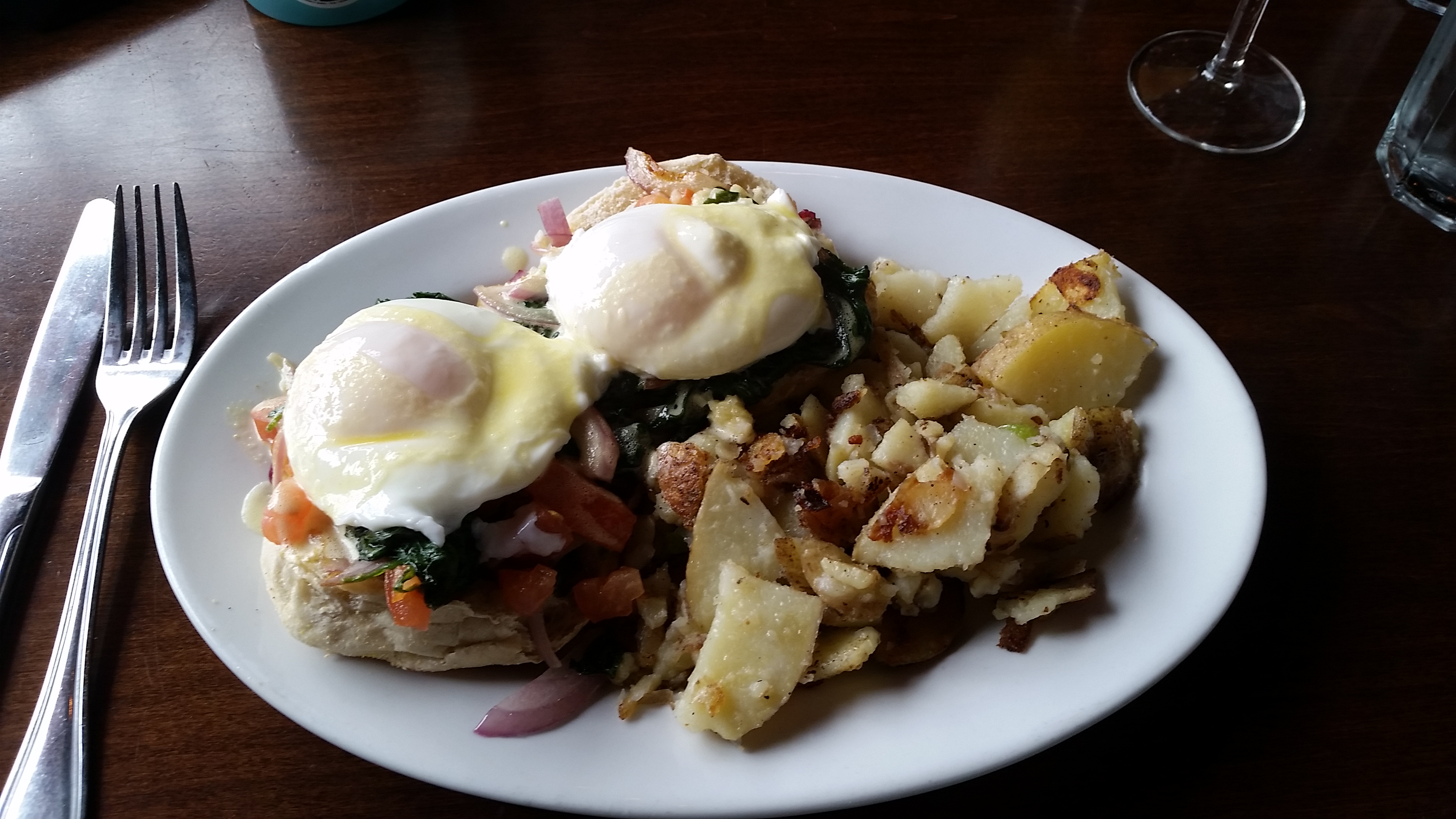